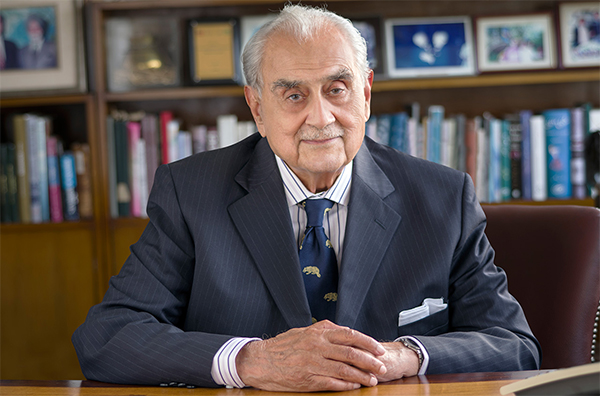 The philosophy of the Syed Babar Ali School of Science and Engineering (SBASSE) at LUMS is based on the advice of the initial group of advisors, and that was "Science and Engineering without boundaries," and this fundamental idea permeated the curriculum, the design of the building, the selection of the faculty and staff, and the choice of the science and engineering laboratory equipment. Best practices were adopted from around the world to provide the best possible environment for the students, faculty and staff. - Syed Babar Ali

The idea of the School of Science and Engineering was based on the advice of an initial group of advisors consisting of Profs. Khalid Aziz, John Kassakian, Richard Larson, Robert Jaffe, Stephen Berry, Dr. Hassan Ahmed and Mir Imran. We met with a subset of them at MIT Endicott House in Boston in July 2005, and with most them at LUMS in February 2006 to discuss the philosophy and anatomy of the School. Dr. Khurram Afridi and Dr. Salal Humair, both MIT graduates, facilitated these discussions. The Endicott House retreat was also attended by Drs. Asad Naqvi, Farhan Rana, Hamid Zaman, Bilal Zuberi, Tasneem Zahir, and Salman Ahsan, who continued to play a role in the planning of the School.

Among those who attended the meeting at LUMS were Profs. Ashok Mittal, Amos Nur and Xiang-Sun Zhang, who subsequently joined the Advisory Board and Profs. Faheem Hussain, Asad Abidi, and Pervaiz Hoodbhoy, who later joined School. On the basis of the recommendations received at the founding retreat, and the meeting in Lahore, we went ahead to plan the curriculum, policies and infrastructure of the School; and set out to recruit the Dean and faculty to bring the dream into a reality.

The School of Science and Engineering is a work in progress. Since the first meeting of the Advisory Board in July 2005, it has regularly met in January/February of every year in Lahore. New members have been added to the Advisory Board, and the Board has made invaluable contributions to the development of the School.

"You do not embark on a journey if you don't have enough money for the ticket. You have got to make sure that you have enough resources plus contingencies because the resources disappear very quickly if there is an over-run. If you have two rupees, you should not spend more than one and a half ".

"There is no such, thing as excellence. Life is an on-going challenge and it is always relative. You have got to keep on improving and challenging yourself to do better. No plan, programme or concept is cast in concrete; you have to keep on modifying and improving it. You must have the will and courage to challenge yourself and say to yourself, 'This is not good enough, I have got to do better!' It is also the on-going spirit you have to inculcate in other people".

- excerpts from 'Learning from others'

LEARNING FROM OTHERS
The autobiography of Syed Babar Ali Syed Babar Ali unveils his life story in his autobiography which sums up him as a master learner and the title “Learning from Others” says it all. Click here to download